An Inconvenient Truth for Tobacco Control

On August 20th, 2018, State Superintendent Torlakson announced the publication of the results of the Healthy Kids Survey at Public Schools. This 16th Biennial Statewide Survery covers the substance use and well-being among California students between 2015 and 2017. These surveys are conducted by the California Department of Education (CDE) and the California Department of Health Care Services (DHCS). The data presented, though, is certainly an inconvenient truth for tobacco control activists as it shows that tobacco use and vaping continued to decline. Let’s have a closer look at this, shall we?

“The consistent and often pronounced pattern of declines in alcohol, tobacco, e-cigarette, and drug use across all grades warrants more attention. As discussed in the section on Substance Use and Mental Health below, this could include declines in personal disapproval and easy availability“

Which certainly warrants attention because I think we all know that there hasn’t been a substantial or noteworthy decline of easy availability of vapor products. If anything, in the above time period said availability may have actually increased. We have no doubt that tobacco control activists would claim their efforts have led to such a decline. Their current aggressive push for flavor bans and other prohibitionist desires certainly are leading to a decline in availability now but that was most definitely not the case in the time period of this survey. The authors go on to say;

So while these students find vapor products easy enough to obtain, the actual reported declines in use and experimentation speak volumes about the perceived, artificially created and based on anecdotal evidence, “epidemic” of e-cig use among minors. Maybe we can call this an “Inconvenient Truth Initiative”.

In case you don’t feel like going through the 88 pages of the survey, we have listed some of the relevant data below for easy consumption. 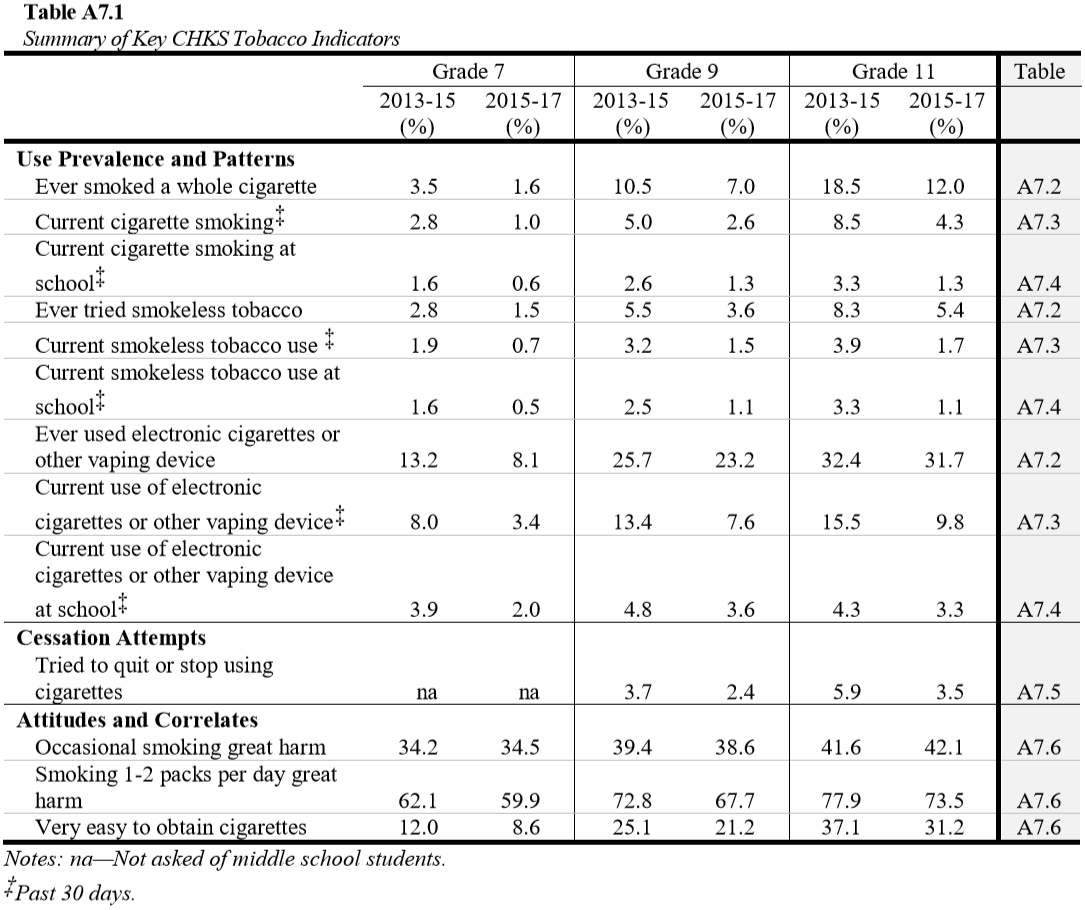 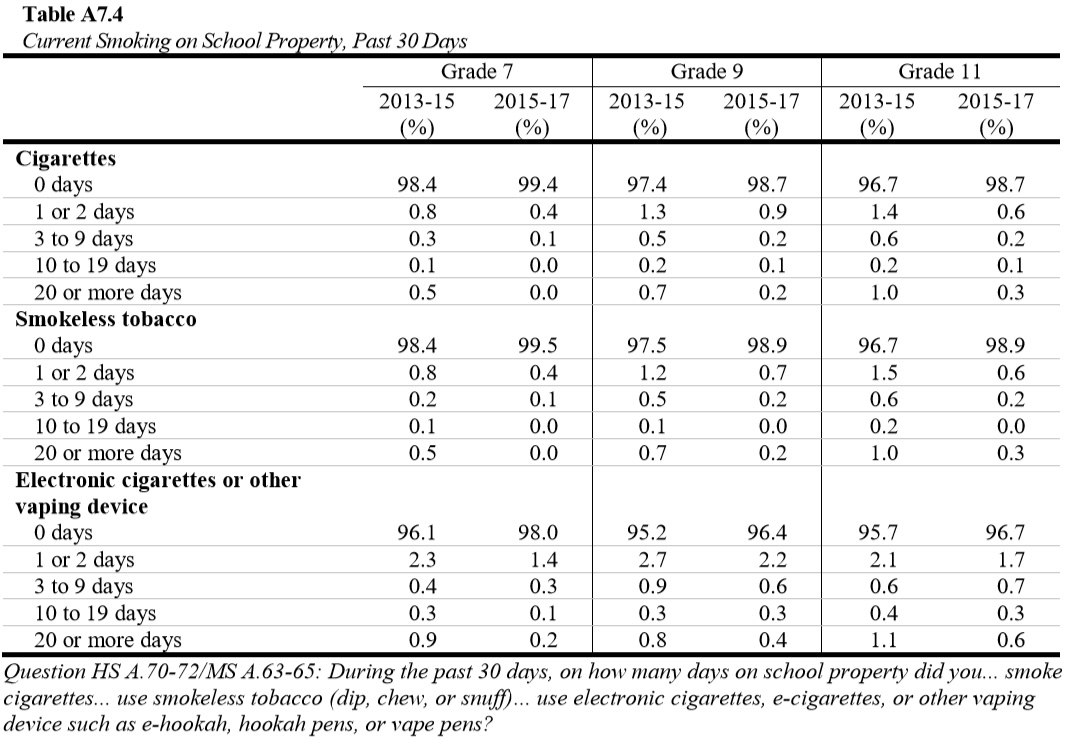 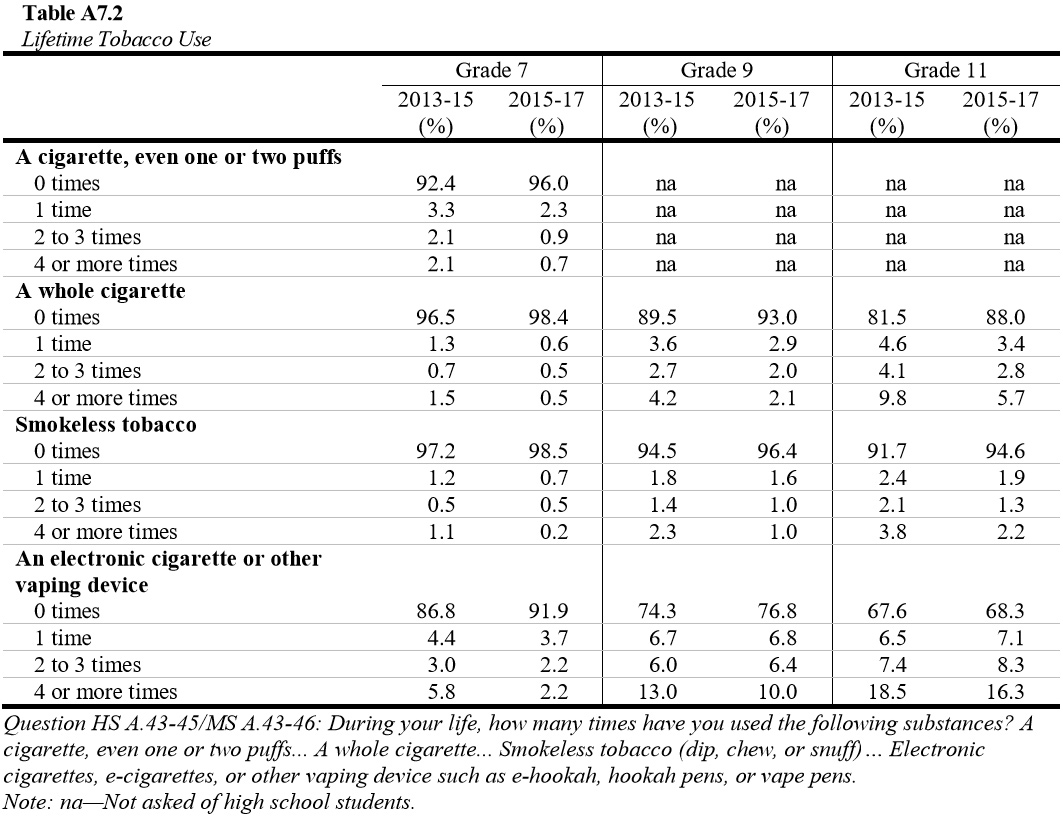 About the Author: Stefan Didak

Stefan switched from smoking to vaping in 2012 and has been a vocal and active supporter and advocate for vapor products and tobacco harm reduction and is frequently seen testifying in front of state and local legislators and policy makers. Outside of Stefan’s legislative and PR efforts, including the creation of the #notblowingsmoke website and movement, he is mostly known for working out of the world’s most famous home office. Stefan has been featured in many articles and interviews on the subject of vapor products, electronic cigarettes, and harm reduction, including professor Stanton Glantz’ Tobacco Control blog at the University of California, San Francisco.

You can help support the work we do at Not Blowing Smoke by donating directly through Pay Pal by clicking on the button above.

You can also get Not Blowing Smoke apparel with thought provoking messages that will help encourage the conversation in the wider public.